What is Comedy? What makes us laugh in theatre? A great deal has been written about this and this review could not do the concept justice. But reading and watching recently a performance of Molière’s L’École des Femmes raised the matter in front of my eyes.

In this play, which as most of Molière’s plays, belongs to the subgenre of a comedy of manners, there are many of the elements that one would expect in funny plays. There are stock characters –following the tradition of the Commedia dell’Arte; there is a great deal of “double entendre”, often through parallel dialogues on the stage and which Marcel Proust could not fail to notice; there is a critique to popularly unpopular professions, such as notaries and other representatives of the law; the plot revolves around the universally farcical figure of the cuckold or “cocu”; there are surprising and magic solutions to tangled up problems that will draw out a smile; there is a bit of slapstick and “coups de bâton” in a purely guignol tradition. All these elements are in the text and the staging can supplement them with mimicry, ridiculous clothing, and doll-like movements.

As was the tradition in seventeenth century French drama, the play is written in Alexandrines and follows the three Aristotelian units of plot, time and place --athough in this play the time unit is as flexible as Dali’s clock. It also follows the more French concepts of “vraisemblance” and "bienséance" (which would have banned Shakespeare) as even the he guignolian coups have to happen off the stage. This is, and was from its first performance in 1662 onwards, one of the most successful plays by Molière (Jean-Baptiste Poquelin, 1622-1673). At its première it already pleased the King, Louis XIV, gaining his support which later became crucial. L’Ecole des Femmes followed L’Ecole des Maris by one year, and it continued the very popular themes of cheated husbands and of the education of women. It was also successful because it was controversial, highly controversial in fact. And this was easily the best thing for its ticket-office.

Apart from some “sous-entendres” or “equivoques” which at the time seemed to border obscenity too closely (and therefore violating the “bienséance” rule) the play also raised debates on the role and education of women at a time when women were very actively engaging in their literary and intellectual Salons (les Précieuses ridicules). A “querelle” ensued for which the best ghostly protection came from the royal benefactor. Molière replied to the criticisms with another play, La Critique de l’Ecole des Femmes in which a woman and a muse discuss the previous play. Within a few months from the first staging, the two plays were subsequently performed together.


I had read this play years ago, but I reread it recently because I was going to attend, two weeks ago, to a performance at the Comédie Française. The theatre founded by Louis XIV, the ghostly patron of significant presence, in 1680. 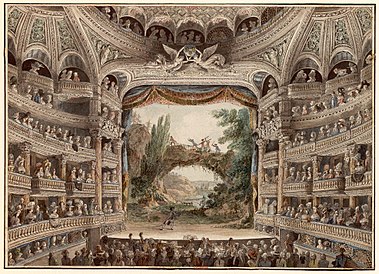 The mise-en-scène on the 3rd of July at the Comédie Française was by Jacques Lassalle and the two main actors were the formidable Thierry Hancisse (Arnolphe) and the angelical Adeline d’Hermy (Agnès).

I extract no joy in summarizing the story of a novel or play in my reviews, although I am interested in plot dynamics. In this text, the main character, Arnolphe, begins with great confidence on himself and on his aims, but gradually loses control of the situation he himself has created and falls prey in his own net. This turn around constitutes part of the comic (or the tragic?), and follows the tradition of the “Burlador burlado”, a stock figure which originated in the “Don Juan” from early seventeenth century Spanish drama (Tirso de Molina’s “El Burlador de Sevilla”). A superficial reading therefore could take us along a well trodden path of plot and charcter development.

With Lasalle’s interpretation--accompanied by a flawless rendition of the two actors, however, the easy understanding of the play was turned upside down for me.

The Arnolphe I saw turned through the long monologues into the tragic figure of a man who desperately loses his love precisely during the process in which this love captivates him more and more. His obsession in controlling a woman, to the point that he is willing to marry someone ugly and stupid, becomes his undoing precisely because the chosen lady is neither dumb nor hideous. The actor looked exhausted after wrenching out so much anguish out of his text.

But if the above distressing Arnolphe could be extracted from Molière’s text (and he himself was its first actor), we see in Lasalle’s Agnès not just the one that Molière concocted, who rebelled against the string of the puritanical moral laws and who was willing to take risks in order to reject her unsuitable suitor, but one who will also show disdain at her silly and weak beau when he proved not to have her courage.