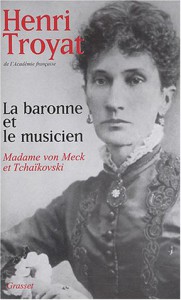 What a perplexing relationship between the Russian composer Pyotr Ilyich Tchaikovsky (1840-1893) and his compatriot Nadezhda von Meck (1831-1894), his financial Muse! Their correspondence, copious and out of which over a thousand letters have survived, constitutes the score of a progression as it proceeds along all the necessary chords from an abstract and suggestive f minor tonality in full symphonic deployment to a staged concrete drama that ends in Death. And I don’t think there is a spoiler here.

This account has been offered to us by Henri Troyat (Lev Aslanovitch Tarassov – 1911-2007), a Moscovite who arrived in France with his family at the age of six, and where he grew to be a Member of the prestigious Académie française by 1959. He is well known for his prolific output of fiction and biographies. His prose flows like clear water and the richness and appropriateness of his vocabulary baffles me. His command of Russian also means that, as he listed in the bibliography, he had studied the three volumes of the correspondence (in the original and covering the years 1877-1890). His ability to stand astride two cultures accounts for the popularity of his biographies of both French and Russian political and literary figures.

Troyat focuses on the epistolary relationship of this peculiar couple and has taken, principally, her standpoint. Very little is discussed of Tchaikovsky’s music except tracing his production as it occurred across the years. Rather than to Tchaikovsky, on whom so much has been written, I felt a great curiosity to find out more about this phenomenal Madame von Meck.

Nadezhda was the daughter of a well-to-do family and married at the age of sixteen Karl Otto Georg von Meck, an Engineer and civil servant, and twelve years her senior. They had eleven children even if according to Troyat there was no true sensual love between them. So far so good; nothing extraordinary in this.

What was outstanding is that at some point this woman convinced her husband to quit his honorable but ordinary job and put all their money, which was limited, into what she detected was a major trend that would transform Russia--and their fortunes. They put their capital in the building of Railways. In twenty years Russia went from one hundred to fifteen thousand miles and two of these expanding Railway networks belonged to this couple. The Von Mecks grew immensely rich.

A widow in her early forties she then concentrated marvelously all her management skills in handling her business and fortune, and her very large household--with a house with sixty rooms and her numerous offspring. She did this with great efficiency, determination, acumen, guile and discipline.

She also traveled greatly. Having her own coach, which fully and comfortably accoutered could be appended to public trains, she zoomed through Europe constantly, spending time in Vienna, Paris, Lake Cuomo, Florence, Nice, Berlin, the Loire valley, amongst other places. In Russia she also moved from mansions in the country to those in city.

And she had a passion. Music. As a no-professional pianist of excellent abilities, she kept, together with the nannies and a full troupe of servants and serfs, some musicians in her household under her aegis. One such was the young French, Achille Claude Debussy, as piano teacher for the children. She had hopes for him: Dieu veuille qu’il ait une parcelle de son (Anton Rubinstein’s) génie. It seems at some point Debussy entertained the idea of marrying one of the daughters.

It is through this musical turmoil that Tchaikovsky entered Nadezhda’s soul.

From that moment began a financial relationship dressed up in epistolary etiquette, refined manners and beauty, yes, also beauty and possibly… some love. The collection of letters is also a treasure of enlightening material for musicologists. These letters accompanied the premieres of the Symphonies, Operas, and chamber music in the main European towns.

The aftermath of The Tempest was a letter from Nadezhda to Tchaikovsky offering him some menial work, such as some musical transcriptions and simple compositions. This was in December 1876. This offer grew gradually but fast for the following two years, until Mme von Meck took over and settled fully Tchaikovsky’s debts. Once clean he was maintained afloat by the establishment of periodic installments on a renewable annual allowance of six thousand rubles when an average (how representatives were “averages” in Russia, the country were dispersion is best exemplified?) salary was a tenth of that amount.

Soon after they met, he got married, and the newly married couple started suffering immediately. And so suffered also Nadezhda , since she was possessive and jealous of everything surrounding her composer. Luckily for her, Tchaikovsky soon felt unbearably trapped in his unsuitable marriage to a woman. Madame von Meck gladly bought back his liberty and paid for the divorce settlements.

She continued to free him from everything else, except from herself. When she settled his debts he was also convinced to leave the Conservatory, with all its distracting duties. All the restrictions for his liberty to dedicate his time for composition she had therefore lifted.

Together with enlightening his burdens, she offered him further free and open and physical grounds for the expression of his creativity. He stayed several times in one of her secluded states. And to top it all off, and now that his time was costless, she also presented more personal tokens by sending him that which would measure the full value of such a treasure: a watch designed by Cartier. He accepted it.

There is always a price to pay, even for money. What she set as her condition he easily, and thankfuly and greedily agreed to. They were never to meet in person. Troyat shows, though, that at a couple of times they almost run into each other in all their crisscrossing of Europe. For her these occasions became a titillating experience. It was so exciting to dare to defy her own rules, the only ones she accepted.

And if their bodies did not meet, their blood did. She maneuvered until she married her son to one of Tchaikovsky’s nieces. Talent and money should entwine. But it was another, sadly, unsuitable marriage.

During this epistolary and financially sound time his music production and fame grew considerably. He was called from London and from New York. And most important, the Tsar became a follower. From 1888 Alexander III offered the composer the annual pension of three thousand rubles a year (generous but still half of what Nadezhda was giving him).

But even if his musicianship was flourishing, and the income this brought supplemented the two steady allowances, his traveling and living expenses climbed faster. Ten years into the period under her financial aegis, he not only needed still her golden letters, but required them faster. By the year he started receiving also the support of the Tsar he requested her a couple of times an advance on the future allowances stipulating as well by when did he want to touch his funds.

These letter extracts are somewhat embarrassing to read.

But all these flows did not fall on deaf ears.

If the encounter was prompted by The Tempest and bolstered by his First Piano Concerto, it was with the 4th Symphony that their relationship was sealed. It was premiered in 1878 and he dedicated it to her.

When she received the piano transcription of this piece she could not stop herself from playing it.

She sent him FF 1500 for the publication of the piece.

With this piece their disembodied friendship was confirmed as an abstract confluence of ethereal sounds tuned to a tenuous minor tonality, in which the notes and chords move in a more or less harmonic manner and in a more or less melodic way. This particular Symphony is also constructed, ironically and pertinently, by two main themes that do not seem to conflate nor weld together. Similarly to their souls.

As Tchaikovsky continues his successful career and becomes closer to Imperial power he moves further away from her. Consequently she becomes more and more uncomfortable as she is well aware that her rival is the very Tsar of Russia. When the Emperor proposed to the composer to write an opera based on another of Pushkin’s stories, the Queen of Spades, she tries to dissuade him. Nadezhda does not like opera. Nor did she like Pushkin’s story. And then, he notifies her that the opera is finished. An insulting fait accompli, when before he would discuss with her his musical choices.

She becomes very suspicious. She sees the parallels between the money-driven main character of the story, Hermann, and her protégé, as well as between the Countess, who has the key to his material wealth and herself. And then the curse in the story: one will die because of the other.

She decided to stop her support. After thirteen years. That was September 1890.

The premiere of the Queen of Spades, a few months later, was a success in the Theatre Marie in St Petersburg.

But maybe he had played with bad cards.

Just a few days after he premiered the Pathétique in Saint Petersburg, he succumbed fast to the cholera outbreak in Russia. This happened also at the time when the noise about his homosexuality was becoming louder and in a country where such preferences were then a crime and were punished with a Siberian exile.

Did he mistakenly or willingly drink the poisoned water?

And then, only three months later, she also died.

Having learned more about this unhealthy relationship, there remains, however, a clear beneficiary. Nadezhda von Meck purchased from Destiny the Time that Tchaikovsky’s Talent needed. If she could not buy talent for herself, at least she bought it for us.

Posterity, we, shall forever remain grateful to her.