This painting is the unfolded cover of the catalogue to an Exhibition presented at the Musée Marmottan Monet in 2010. Unfortunately I did not visit the display, but I am fortunate in that I can treasure this catalogue.

There are two aspects I want to discuss in this book. The initial and obvious one is its contents, but I also want to consider the startling effect that some of its contents have had in the 2013-The Year of Reading Proust, when I posted them there.


As the preface clearly states, this exhibition places itself in one of the trends that Gender Studies has originated. Its objective is to examine the role of women in the art and literary world during the second half of the nineteenth and first decades of the twentieth century in France. A pioneer in this direction was the American Art Historian Linda Nochlin (b. 1931), but this exhibition follows closely the steps of another one at the Centre Pompidou about a year earlier (elles@centrepompidou.fr/blog/).

The main focus is a group of female painters as well as a survey of the historical circumstances in which their artistic activity could flourish. Given that the École des Beaux-Arts was not opened to women until 1896, a more private setting would have allowed these women to explore their interest and abilities in the arts. These were the Salons. The relevance of these exclusive and personal gatherings in the French cultural scene was not new, but during this period they acquired new characteristics as the women gained ground and were moving towards professionalism.

And it is in this particular context that Marcel Proust emerges. His master work La recherché du temps perdu is loaded with recreations of the artistic and private social circles in the Paris of the Third Republic. And even if he did not develop a full Salon-literature in the tradition of Diderot and Baudelaire, he published several articles on these Salons in major newspapers before he started his macro novel.

He had been there. And as he had seen and listened, he had also observed and identified the feminine coding of such circles. He recorded them.

And it is through Proust’s lens that this exhibition presents these feminine French Salons.

Four salons are selected in this book. They were not the only ones. There was a myriad of them in the Paris of the time and many were located in the Monceau area. But as this exhibition is presented through Proust’s lens, some are just mentioned in passing, such as the one organized by Madame de Caillavet. Even though Proust attended it, it was her exclusion of musicians that has excluded her Salon from this exhibition.

The relative of the two Napoleon Emperors had a Salon with two editions. She began during the Second Empire in the Rue de Courcelles but succeeded in maintaining its importance during the Third Republic when she moved it to the Rue de Berri. Proust attended the latter together with his friends Reynaldo Hahn and Jacques-Emile Blanche. And after writing his Un salon historique in 1903, he also included her, as herself and as a model of the still lingering Empire society, in La recherche.

Apart from some astounding portraits, the exhibition displayed a magnificent fan, in a Japanese style, adorned with the signatures of forty-nine celebrities amongst whom we can recognize a Goncourt, Maupassant, Dumas, Zola, and Anatole France. We could try to picture her in her noble surroundings airing herself with the minds and creations of these writers and musicians and painters.

I also remember her as major figure in the success history of the House of Cartier. It was she who introduced the objects of still inconsequential importance, and fabricated by still-with-no-name goldsmiths, to the Empress Eugénie. The walking canes or tea sets opened the way for subsequent treasures and patrons and for the coining of the name in luxury.

Winnaretta Singer could have stepped out of a Balzac novel. This is industrial money marrying into the secluded nobility. By marrying Edmond de Polignac, they could have also been characters in the Sodome et Gomorrhe volume, since both were homosexual.

Proust visited this Salon too, when he was introduced by the Count Robert de Montesquiou-Fézensac (by spelling out the full name, I am showing I do not belong to those circles, as Marcel Proust would have noted). This Salon was notorious for its modernist tastes in Music. If the pure Romantic repertoire and musicians (Berlioz and Liszt) were to be expected chez the previous Princesse Mathilde, at the Polignac’s, the sounds heard were those produced by Fauré, Chabrier, Ravel and Falla, or the older French music as the modernists revived the interest in Couperin and Rameau. An opera by the latter was performed at the château in the Avenue Georges-Mandel.

And it is in honour to the music that Proust dedicated his writing on her Salon from 1903 Le salon de la Princesse Edmond de Polignac. Musique d’aujourd’hui echos d’autrefois, even though he could have concentrated also on one of her Monet paintings, since he thought that she had one of the most beautiful Monet his eyes had ever set eyes upon.

Her presence in this exhibition is on two counts. She is one of the studied Painters and she was also a Salon hostess. And yet, this book indicates that, until recently, she has been a figure more for the literary rather than for the art historians. In posterity, her name has been attached to the names of Dumas, Montesquiou, Anatole France and Proust, rather than to her canvases. This exhibition is trying to correct that, also in two counts.

She was a woman who got up at dawn to spend the full morning painting and reserved a couple of afternoons for her social projection. And she painted not just flowers but wonderful portraits too. Her salon had a strong musical interest as well, and was particularly strong on theatre, which was one of Proust’s major interests.

And even if she can be associated closely with Proust, since not only did she welcome the writer often at her Salon and at her summer house, but also illustrated his first book Les plaisirs et les jours, this book and exhibition however dethrone her from her established position as the main model for Proust’s Mme Verdurin.

This is a portrait of Réjane on her Château de Réveillon, where Proust and Reynaldo Hahn stayed as Lemaire’s guests. 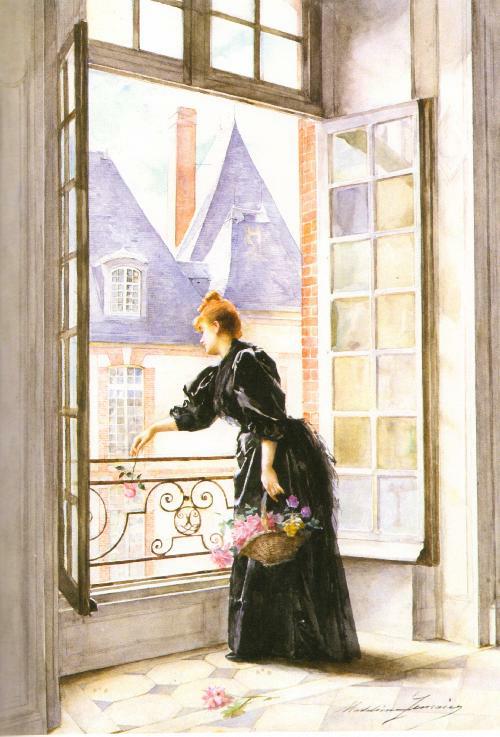 And for me the revelation of this exhibition is Marguerite de Saint-Marceaux. Her Salon lasted for about fifty years, but its heyday was from 1892. Born into a family of artists and marrying artist twice, she also was engaged in writing her diary. She has left us 1400 pages of a diary covering the years 1894-1927, which must be a fascinating record of Parisian cultural life, and which I plan to read.

This catalogue presents her as the main model for Mme Verdurin given that her Salon in the Boulevard Malesherbes was the most consciously dedicated to the arts. The dynamics of her Salon were also different from the others. She received her noyeau of about only twenty selected fidèles for dinner while the subsequent music recital would welcome a few more visitors. She directed a cultural agenda with an identified topic such as the discussion of a given book or painting or the listening of a particular piece of music, with Modernist music as center stage.

But what is most extraordinary about her salon, and which approaches her the closest to the peculiar personality of Mme Verdurin, Proust’s creation, was Marguerite’s antimondain stand. She openly displayed the contempt with which she contemplated the mondain or high nobility circles. This setting herself and her followers apart, was to be revealed by a different dress code as well. The members of her Salon were to dress “de travail” rather than in full gala. Thereby they would show their superior distinction in this more dignified fashion.

Having visited the private Salons where women could develop their art interests and abilities, the exhibition then centers on a few of these painters.

Of these the most outstanding is Berthe Morisot (1841 – 1895), who does not need rehabilitation since she is already part of Mount Olympus of Art History. It is laudable that the exhibition has not centered on her, even though the Musée Marmottan houses a considerable collection of her paintings. But the one I walk away with, and in particular her drawings, is Rosa Bonheur (1822-1899). Her sketches of lions, of the hooves of horses, of running dogs are unforgettable in their simultaneous delicacy and power. Her connection with Proust however, escapes me, but no matter, her non-feminine art is a good companion to the writer’s exploration of the boundaries between the sexes.

Seeing Bonheur’s drawings now reminded me of a recent visit to the D’Orsay Museum. I stood for a while in front a huge painting of cows walking and advancing diagonally towards the viewer through mud of a deep chocolaty brown. I was mesmerized by that mud protruding out of the canvas. Who on earth would be willing to deploy so much effort and attention (chore, exertion, endeavour) to such a scene? Imagine when I surprised my ignorance and saw in the label that this painting was the result of the hard labour of a lady with the dainty name of Rosa Bonheur.

And now we come to my second consideration, and that is the proposal of Saint-Marceaux as the main model for Proust’s Mme Verdurin. The catalogue acknowledges that Proustians follow Tadié’s identification of Madeleine Lemaire as the main inspiration for the Patronne, but shifts the attention from Madeleine to Marguerite. The main basis is the very artistic focus of the Salon and its self-conscious and self-limiting identification as antimondain as stated above. There is also a reference to a letter written by Lucien Daudet to Marcel Proust in 1922 in which it seems he identified Marguerite as “une Verdurin beaucoup plus Verdurin”.

The Lemaire-as-Verdurin concept is so entrenched amongst Proustians, however, that this proposal has received opposition in the Proust Reading Group.

My stand on this is also what Proust defended. That is, his characters were the result of a multiplicity of observations as well as his own creative abilities. In the particular case of Mme Verdurin, she is too much of a caricature to accept her as a literary mirror of anyone in Proust’s life.

This debate has made me think about the dynamics of academic research. I can imagine how the top rank awarded to Lemaire could be made by scholars who may not be as strong in the knowledge of Salons as they are on the particularities of the novelist. While now their proposal is questioned and rectified by scholars who have concentrated on Salons. The latter have gained ground lately with the backing from Gender Studies, as Salons were the territories of women.

The work by Anne Martin-Fugier and Laure Adler are often cited in this catalogue.