Having a fair collection of books on individual Art Museums, usually purchased on my way out from a visit and which then go straight into hibernation in my shelves, I decided that it was time to revisit those museums from my armchair and read and look more carefully at those wonderful illustrations.

I started with my pocket guide to the Berlin Gemäldegalerie.

The Gemäldegalerie is a fascinating museum because unlike many of its cousins in the European capitals, its foundations are not grounded on a princely or dynastic collection. Its origins are ideological. Born out of a didactic aim, proper fruit of the Enlightenment or Erklärung ideas, it was conceived to educate the people. And this accounts for the somewhat different array of periods represented. Most of those cousins had as the core collection the High Renaissance and the Baroque. Those were the times during which Monarchs and Princes were the major patrons as well as the great collectors. They commissioned or bought only what they liked and their tastes were mostly contemporary and reflected the current fashion. Or rather, they set the fashion in art and they made the artists. And as political patronage was political propaganda, they procured portraits or political allegories or depictions of history, as well as more private or religious pieces that would promulgate benevolence for them in the heavenly spheres.

Instead, the Gemäldegalerie began with a rational plan. Aloys Hirt (1759-1837), first professor of art history in the University of Berlin, was the first of its conceptual architects. The aim was to put together a good distribution from a complete as possible array of periods and styles as could be managed. The architectural architect was Karl Friedrich Schinkel (1781-1841). He devised the spectacularly grandiose first home of the collection, the Altes Museum. To these two personalities the art historian Gustav Friedrich Waagen (1794-1868) added his honed connoisseurship abilities.

As these were also turbulent times, some collections came up for sale. The first one that could be approached was that of Vicenzo Giustiniani, a Genoese banker from the seventeenth century. A considerable chunk of around 160 pieces from the Rome assemblage were negotiated and purchased in 1815 in Paris with a good selection of the Primitives and Early Italian Renaissance an Caravaggio pieces. The funds were provided by the Prussian King Friedrich Wilhelm III(1770-1840) whose interest in the project was won by the pioneering sponsors. Soon, another selection from another existing collection was added. This time it came from the British businessman Edward Solly (1776-1844) whose family had based their trade in the Baltic coast and who were living in Germany. It was thanks to Solly’s selection that Berlin now has such a fabulous assortment from the very early Italian and Netherlandish Renaissance. Running into some financial difficulties, Solly had to sell his three thousand paintings. Close to seven hundred ended up in this Berlin collection.

When Berlin became the capital of a united Germany and the growth of the industrial base generated considerable capital, the impetus of this still new museum in Berlin received more support and acquisitions continued. Prosperity during these dynamic and agitated times was not for everyone, however, and another failed private enterprise generated another acquisition opportunity. Barthold Suermondt (181-1887) also had to sell his treasure. Amongst his jewels there was Van Eyck’s delightful Madonna in der Kirche.

This was also the time when the Art historian Wilhelm von Bode (1890-1920) left his mark. The rich Rembrandt selection bears his print and the enlarged Netherlandish selection was promoted by his curator, the colossus of Art History, Max Jakob Friendländer (1867-1958). And the building, to which the much larger collection had to move, bears also Bode’s name. From 1904 stands The Bode Museum at the Northern tip of the Museum Island.

During WW2, a considerable amount of the very large paintings were lost since no appropriate shelter could be found for them. After losing more pieces to the Russian and American looters, the collection had to be, like other things and hearts in Berlin, divided into a Solomonic and unsatisfying twosome. The Eastern collection remained in the Bode museum while the Western moved to the Dahlem building. Not until 1989 was the collection united again in the Kulturforum.

There was a great deal of noise last year because the collection was to suffer yet another transfer to a projected new building in the Museums island and surrender its current site to the Modern collection. The latter has received a large donation by Ulla and Heiner Pietzsch composed mostly of Surrealist and Expressionist pieces. The conditions of the bequest seemed to require the site where the Old Masters have their home. A large uproar in the art and culture circles succeeded in halting this idea because it would have meant sending to storage about half of the Gemäldegalerie collection for close to a decade.

But the dilemma between the preeminence of the Old and the New Masters may not have finished yet.

If part of the Gemäldegalerie collection is to undergo a more prolonged hibernation than by Museum books, I shall have to leave my armchair and go and visit that beautiful selection of paintings again before they are locked up.

Out of the 300 paintings selected in this comfortable to carry, but a bit too small to fully appreciate book, I have selected a few for my review. 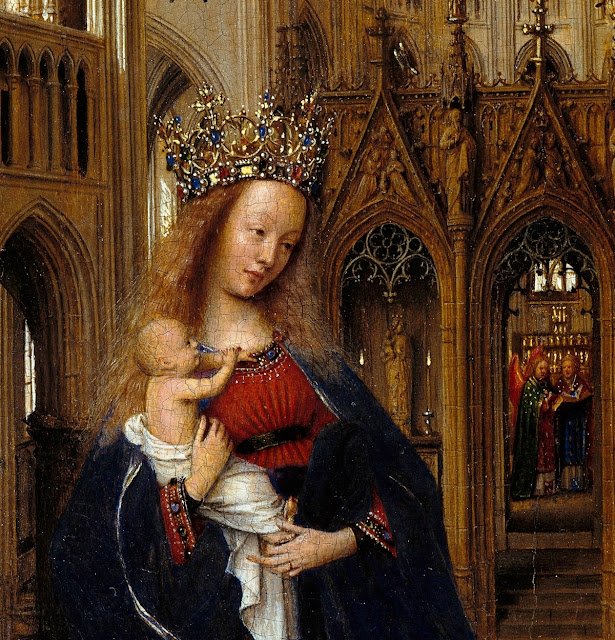 Lucas Cranach the Elder. The Fountain of Youth, 1546.

And I just hope that now Amazon does not delete this review - it may not like Caravaggio's nude.