Recently I looked at the guidebook for the Gemäldegalerie in Berlin. That was an example of an art collection born out of the Erklärung. Now I wish to visit another kind of museum. There is also the dynastic model and one of its best prototypes is the Kunsthistorisches Museum (KHM) in Vienna.

We could say that for the KHM it all starts with this painting, really. Both sitter and painter constitute its foundations. Although we could imagine that Maximilian would have liked for it to have begun even earlier. He was always so keen to aggrandize the supremacy of his family lineage.

And the painter, the Northener Albrecht Dürer who was fascinated with the South became one strong model of the international artist. With his travels and stays in Venice he built the bridge that spanned the North and South banks of European painting during the Renaissance. This bridge suited the Habsburg dynasty so very well.


And then this other painting presents to us how the story of this collection continued.

Bernhard Strigel. Family of the Emperor. 1515.


Here is Maximilian’s family. His two grandsons, the older Charles standing in the middle and the younger brother Ferdinand with the arms of the Emperor around him, would split the political power of the Habsburg Empire into twin courts as they both became, in succession, the heirs to the Empire of their granddad. The family would manage their geographic power separately from the two foci of Vienna and Madrid, even if they maintained the same goals. The family remained close. Too close for good biological practices, in fact. Anyway, their allegiances and intermarriages survived for close to two hundred years and left some traces for later times, as we will see later. Apart from their genes, these two courts shared their interest in the arts, and gave birth to twin dynastic museums: the KHM and the Prado.


Apart from the fact that the two sides of the family borrowed art pieces from each other, some particular members began to collect on their own. The first member on the Austrian side who started consciously to accumulate beautiful things was the Archduke Ferdinand II (1529-1595), son of Emperor Ferdinand I (the youngest in the family portrait above) and nephew of Charles V. When he was made Regent of Bohemia he started his collection of portraits and armour and kept it in the Castle of Ambras, near Innsbruck. His choices reflect the tastes of the princes of the Renaissance who enjoyed the pleasures of court life during periods of peace but who still thought of themselves as warriors.


The next self-proclaimed collector was the Emperor Rudolf II (1552-1612), grandson of Ferdinand I and nephew of the Archduke above. Rudolph was a peculiar character. Born in Vienna, he was then sent for a while to the cousin court, from where his mother originated and where his uncle Felipe II reigned. There he learnt to love Titian and Bosch. And when he went back home and became Emperor he had the power and the means to pursue his interests.. He was and is judged, however, to have been a dreadful regent and politician. He got into serious trouble with the Turks and eventually with his own people who changed their allegiances to support Rudolf’s brother, Matthias. But nowadays Rudolph’s court is greatly valued because it was friendly to the sciences and arts. Posterity, particularly foreign posterity, is grateful to Rudolf’s housing the astronomers Brahe and Kepler and to his adventurous tastes in art. We have grown indifferent to the manner with which he dealt with his Empire and his subjects.

His taste had widened beyond the portraits and armour of his uncle. Despite his times and his family, he remained somewhat aloof to the histrionic religious differences that tore his epoch, and added the beautiful and rich collection of paintings by Brueghel and good samples by Cranach. Art from the Protestant lands was not banned from his collection.

The Breughel room is one of the best in the KHM now. And befittingly there hangs his Babel Tower which could be seen as what would happen to the Hapsburg Empire later on.

Peter Breughel the Elder. The Tower of Babel. 1563.

Rudolf also liked mannered inventions and got paintings like this one. 
Rudolf’s collection, however, was not entirely protected from Politics and as some of his paintings were in the Prague Castle when later on the Swedes entered the town in the aftermath of the Thirty Years War, and some of the paintings were lost in the looting.


The third kernel of the collection was started by the Archduke Leopold Wilhelm (1614-1662), son of Emperor Ferdinand II and brother to the successor Ferdinand III (1608-1657). If the Thirty Year war had meant losses to the collection of Rudolf (his grand uncle), some of the repercussions of the war created new opportunities for the acquisition of art. As Regent of Netherlands (1647-56) he was in the right place at the right time to take advantage of the continued turmoil in Europe. After the Revolution in England several treasures came up for sale. This time the coveted collections of the assassinated Buckingham (George Villiers 1628-1687), very strong in Venetian pieces, and of the executed Hamilton went up for grabs.

Leopold seized them and he was fast. During only nine years he accumulated 1400 paintings. But not all came from distressed collections. Many works came directly from contemporary painters and for Leopold, like for Rudolf before, the religion of the origins of the art did not matter. Vermeer entered the grouping. 
David Teniers painted Leopold with his treasures. This is a visual catalogue since most of these paintings are in the KHM now. 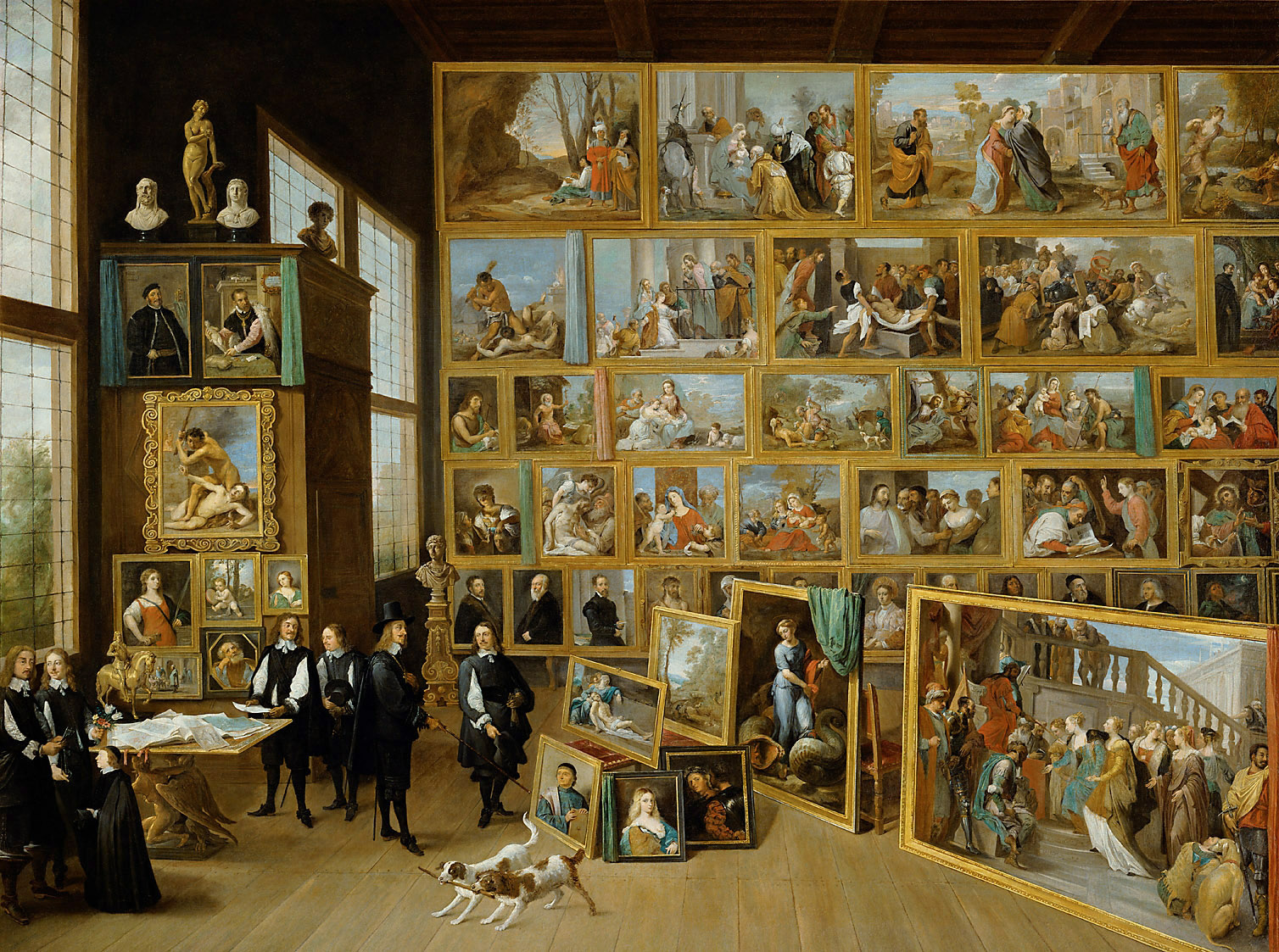 These three healthy seeds of art collections grew into a full being when they were assembled together and declared a single Imperial property. They were first housed in the Stallburg but somewhat later moved to the Belvedere Palace, where they became available for public visits and we can say that they started their life as a Museum. When Vienna remodelled itself, grandly, during the second half of the nineteenth century and the spectacular Ringstrasse was built, the paintings got their own building. Gottfried Semper was called in and his monumental Kunsthistorisches Mueseum with its lofty entrance, magnificent staircase and lovely floors.

These provided a majestic setting for the televised ballet part of the New Year’s Concert a couple of years ago.

And even if too many things have happened and these two courts are no longer on the map, glimmers of the splendour of those times remain. This morning I see in the press that the Prado Museum opens a new exhibition dedicated to the service Velazquez paid to the family of the King Philip IV. And among the paintings visiting Madrid from Vienna, we have the portrait of the infanta Margarita in her blue dress.

This painting forms part of a series that hangs together in the KHM and that were produced at the request of Margarita’s maternal and Austrian grandfather. He wanted to follow how the beloved girl was growing up and was being groomed to marry Leopold the future Emperor. The sequence hangs together in Vienna.

Velázquez had to play the role of Skype for the grandparents. 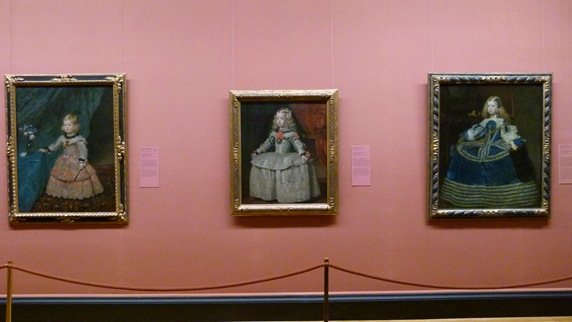 Now I just have to see when can I go and pay my respects to our visitor, Margarita. She is the one on the cover of this guidebook.